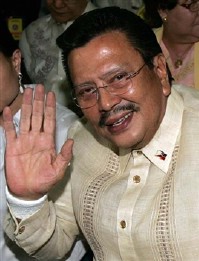 I am Madam Laarni Enriquez, a native of Philippine nationality, and a divorcee. I would like to have a long lasting and confidant relationship with you,if possible entrusting my life time fortune into your possession,as now I am broken hearted and needs someone to trust,without remembering my past and forsaken experiences from close confidants and family. I need someone, who would take me for whom I am and as a life time partner , after making claims of my deposited life. Well, from your profile, I believe in me that you ought to be a very honest person.I would like to give you a brief description of my life.I was once the mistress of our President, Joseph Estrada, and during his tenure in office, I was been used as a courier to depositing his funds, but due to the fracas I had with his wife, Madam Loi and her son, Jude, it cause s a public embarrasement and people came to know that I had been having an affair with the President.

But, not quite long, I was arrested, together with his wife and son, in connection with the 27th July, 2003, failed coup,which I did not have anything to do with, but was alleged that I have been habouring some of the dessident and arms in one of the villa, bought for me by the president. But now, I have been released and I am under security watch and seriously monitored. All, I wanted from you is to assist me make claims of some funds, I did deposited in Belfast UK, As the other deposits documents have been consficated and seized by the government of Madam Gloria, the President.

But,this one is the only one they could not see,as I did kept the documents with one of my close confidant, who was also arrested. The Amount being deposited is much about 20.2 million Euros, as this was the money that was supposed to be used by the President to aquire s ome properties in America and Europe. All I want from you now, is honesty and sincerity, as soon as this money is claimed by you, I will look for a way out and sneaked out of Philippines and travel down to meet you, So we can go into a life time partnership together,in investing this money in your country and anywhere else you prefer.