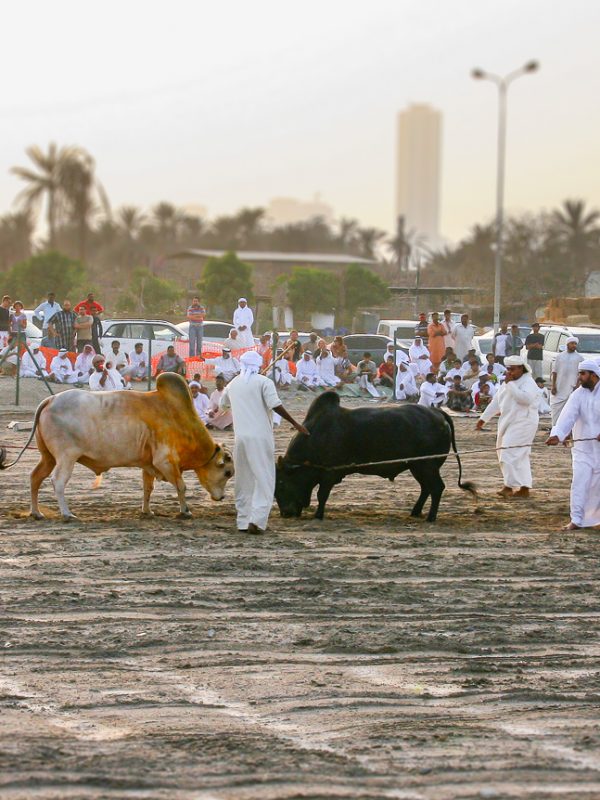 There is something attractive about the prospect of seeing an effeminately adorned Spaniard impaled on the horns of an enraged bull. Beyond that, there is little about ‘ordinary’ bullfighting that appeals to me.

But, come to think of it, I’m not too keen on that bullfighting, regardless of who ends up bleeding. I quite like the Spaniards, on the whole.

But, the type of bullfighting where the bull dies is not the only one. There is another type that leaves the animals intact, except—perhaps—for bruised egos.

One such sport is bull-wrestling, and in Arabia, it is practised in the United Arab Emirates and Oman.

Two bulls of roughly equal stature are positioned head to head, horns locked. Thus standing, they try to push each other backwards to assert who is the stronger.

If the pushing becomes too vigorous handlers stand by to pull them apart. If, on the other hand, the bulls take too little interest in each other, the handlers are there to urge them on.

While for the most part a bloodless event, temperaments occasionally run high in this sport, too. A wrestling-bull may weigh upwards of a metric tonne, much of which is muscle. An Emirati bull-handler would be downwards of 70 kg, most of which is skin and bone.

Should the bull desire to go in one direction and the handler in another, the handler would serve as little more than a decorative trail to the former.

A panel of dignitaries adjudicates the competition. They sit cross-legged on the ground along one side of the square where the wrestling occurs. They appear to be aged anywhere between 30 and 210.

However, when the bulls occasionally decide to go ‘off script’, the judges, to the last man, leap to their feet with surprising agility and speed.

Those wishing to see a matador receive his well-earned comeuppance or such as who might take pleasure from ‘traditional’ bullfighting, will not find this spectacle to be for them.

But for those wishing to see a bull push another bull backwards for a while—before losing interest and attacking a nearby Toyota Landcruiser—bull-wrestling might be just what the doctor ordered.