What: Project meeting with a hint of sightseeing 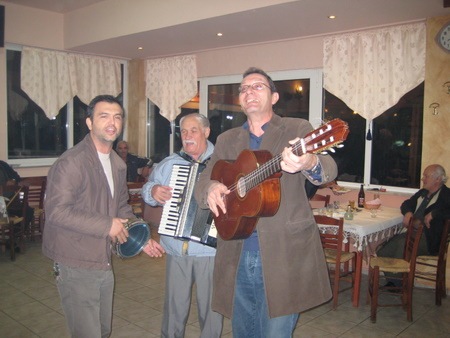 These gentlemen may look innocent enough but combined with sufficient amounts of Tsippouro they proved to be quite sufficient to kick-start our evening out.

When arriving in Thessaloniki, Ioannis had warned us that this was Greece but that it was also the Balkans and that we for this reason shouldn’t accept everything at face value. This was where I made my first mistake upon being given the keys to an "Alfa Romeo or similar" which for once turned out to actually be an Alfa Romeo.

The Alfa Romeo had however been an Alfa Romeo for a very long period of time – and on this particular morning it decided that enough was enough and broke down on the highway outside of Veria – about one and a half hour’s drive west of Thessaloniki.

The sadly named “Former Yugoslav Rebublic of Macedonia” (FYROM) today lays claim to the name Macedonia. This claim is however not entirely uncontested – as the Greek considers themselves the only true natural home to the region of Macedonia. And they have history on their side. It was this area that Philippos II, father of Alexander the Great, considered Macedonia.

Car rental and history lessons aside, having had my dubious Alfa Romeo replaced with a slightly less seasoned swede, a Volvo S40, me and Olga set off northwards in the direction of Loutraki. According to our host Ioannis, there were a set of beautiful thermal pools to be found in a narrow valley up there.

The pools were quite interesting. Hot springs had been channeled into a regular cold water river so that half the stream was a comfortable 40 degrees Celcius while the other half was a fertility shrinking 10 degrees Celcius.

The river sported a small vertical waterfall of some four meters heigh which allowed those bathing there the dubious pleasure of alternating between scolding and freezing showers – which undeniably had a nice effect.

The purpose of my presence in Veria was however a meeting in the EuropeanaLocal project. As a consequence, most of the time was reserved for sitting in a meeting room discussing issues related to efficient sharing of European cultural heritage through distributed service based infrastructures.

The local distillation in Veria goes by the name of Tsippouro and is a particularly evil substance in that it tastes quite pleasant while it makes the mind run away as if pulled by ten wild horses.

An exceptionally nice evening up in the mountains to the south-west of Veria city consequently resulted in a fatal outcome for me as may be seen from the photo below. 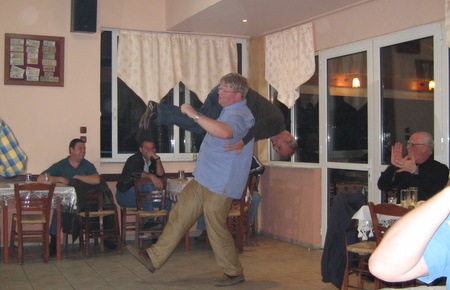 Dancing with Ioannis on my shoulder: Something which may, upon secondary reflection, have been a mistake on my part.