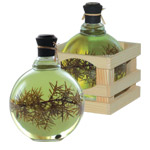 Those of you who are familiar with Western Norway, know that there are some pretty shady products brewing in the pots and stills below the steep mountains by the fjords. However, compared to Brinjevec – the main objective of this article – “our” moonshine tast like fresh apples.

It was in September in the year of the Lord 2006 I first came to encounter Brinjevec. The occasion was a business trip to Slovenia and an evening of high spirit in the captial of the said country, Ljubljana. In the company of my two excellent accomplices, Torbjørn and Tommy, I entered in a bar where we asked the waiter to keep the drinks flowing until further notice. Closing time, however, came first.

At some stage it became evident that good quality would be wasted on our anasthetised taste buds and so we changed the strategy to asking the waiter to bring the worst alcoholic fluids on sale in his establishment – with the purpose of making a top – or rather bottom – five list of Slovene alcohol.

Intrigued by the challenge he set out for the bar and returned time and time again with one drink fouler and more evil smelling than the previous one. Just as we thought it couldn’t get any worse he brought Brinjevec.

There is no means to describe the taste, smell and characteristics of Brinjevec merely by using an ordinary vocabulary consisting of words. The closest one might get in a regular human life would be terpentine. The mere shock of still being able to see after gulping down the first little sip of the drink was almost too much for me.

It was then that it dawned on us that we had a winner. Brinjevec. For the interested a bottle of the said substance can be procured at a cost of about 5000 Slovene Tollars – to be converted to Euros by 1st of January 2007. It is allegedly based on juniper berries and ethanol but I would believe anyone who said it was made from a random mix of terpentine and methanol.

Other than that – go to Slovenia immediately. Go to Trebnik Castle in Slovenska Konjice and buy all their cool stuff – don’t miss the love potion which – if nothing else – is a sturdy herb liqueur.