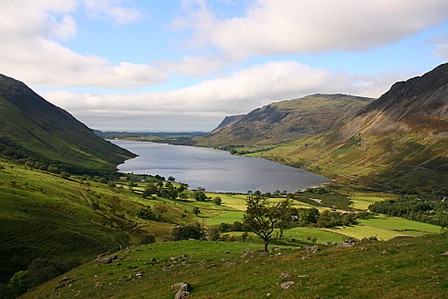 View from the ascent to Scafell Pike from Wasdale, overlooking Wastwater and the Cumbrian coast on the horizon.

This years fishing trip was destined for the Cumbrian mountains in North-Western England, making it the third of our fishing trips abroad, succeeding trips to the highlands of Scotland and to Connemara in Western Ireland. The original team was a bit reduced, leaving only Håvard (Nordvik) and myself. However, strengthened by Håvards student football team, “Pølsesnabbane”, we were far from being short of fishermen!

The thing about English cars 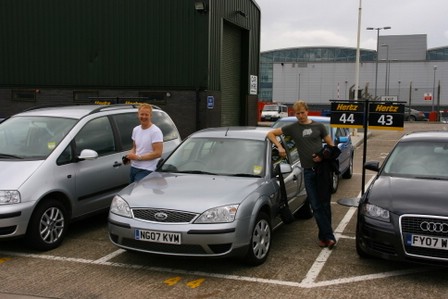 New Castle Airport, car rental car park: While my companions were still smiling, satisfied that they wouldn’t have to drive

The thing about an English car is that the steering wheel is mounted on the wrong side, thus effectively rendering the vehicle useless! This inevitably leads to some quite suicidal driving by foreigners – something which I at one point demonstrated quite effectively while exiting the motorway. The exit at hand was rather on the complex side, offering me a roundabout with at least six exits to choose from – and regulated with traffic lights. Upon entering the roundabout I was meet by a green arrow, something which in Norway means go ahead, the road is all yours.

I was more than willing to accept this kindness on the traffic lights behalf and subsequently didn’t notice the next traffic light some fifty meters ahead, still in the roundabout, which glowed against me bright red. The effect being that I was very nearly run over by a large and rather unforgiving-looking lorry, which honked its horn in a way that not even with great difficulty could be interpreted as positive.

The air was laden with unspoken words – and stern, reprimanding looks from my companions told me that they weren’t words of praise. A heavy silence fell upon the car for the remainder of the drive and normality of conversation wasn’t restored until the car was safely parked – and the first pint of beer no more.

(Under considerable doubt I was allowed to drive on two subsequent occasions.)

The village of Ambleside

Basecamp was established at the comfortable Wanslea Bed and Breakfast in Ambleside, a village at the northern end of Lake Windermere.

Ambleside is beautifully located between the lake and the surrounding mountains and stocks all you will ever need as a tourist – as well as a good few things you could live a long and happy life without – such as the disco in the basement of The Sportsman Pub. This abominable establishment should be avoided at any cost – even that of going to bed early – as other places tend to have rather limited opening hours.

There is no shortage of restaurants in the Ambleside and from what I could tell, a couple of excellent chippers. The food was overall remarkably good, the English kitchen not being as celebrated as e.g. the French or the Italian expectations were low. However, all meat dishes I ordered during my stay put my prejudice to shame. 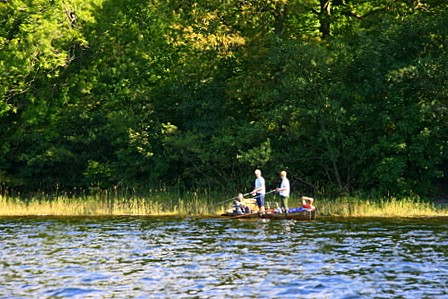 Conniston Water: “…the lake is supposed to contain fish. However, nothing we experienced indicated that the latter was true…”

A bit to the south-west of Ambleside lies the quiet village of Conniston at the northern end of Conniston Water.

Motor boats, rowing boats, canoes and kayaks can be hired here – and the lake is supposed to contain fish. However, nothing we experienced indicated that the latter was true.

We hired two of the least credible looking rowing boats I have seen in my life and set out on the lake which was crowded with sailing boats, steam boats and other monstrousities. We tried fly fishing, we tried spinners, we tried wobblers, in fact, it would be far easier to list the stuff we didn’t try: nothing.

Nevertheless, the success of our fishing trips has never been measured by the catch. If so they would all have been severe tragedies! Boating on Conniston Water is a nice experience, regardless of whether you catch fish or not. It was simply very enjoyable and relaxing. 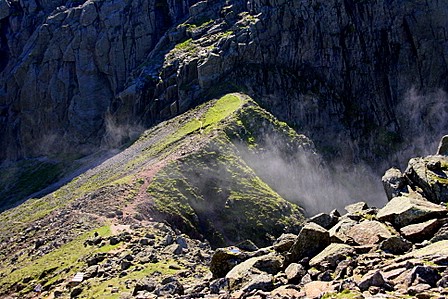 A steep edge on the ascent to Scafell Pike: “…before I had managed to even tie my shoelaces the others were out of sight…“

Englands highest mountain is named Scafell Pike and is located in the central western parts of the Cumbrian Mountains, the easiest access being from Wasdale in the west.

Now, the problem of travelling with a former student football team is that such people are prone to keep exercising beyond their study period. As a result they are bound to come out more physically fit for mountain climbing than yours truly.

This prognosis turned out to be painfully accurate as we begun the ascent from Wastwater (at measly 60 meters elevation). Before I had managed to even tie my shoelaces the others were out of sight. However, whereas they alternated between running and resting, I kept a slow but steady pace non-stop. Therefore we arrived at the summit more or less simultaneously.

I was prejudiced against English mountains before this trip, but as many times before I had to reconsider upon having experienced them. Scafell Pike is a mountain, and a nice one at that. What the summit lacks in attraction it more than makes up for by the bright green slopes of its foothills, lined and divided by stone fences and grazed by seemingly content sheep. 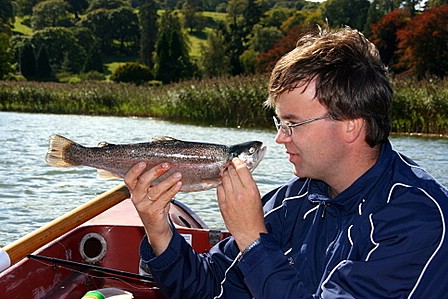 A fat rainbow trout whose days came to a sudden end after a run-in with Håvards salmon-fly.

The desire to catch fish got the better of us and on the last day of our trip we abandoned all good sportsmanship and rented boats in a stocked lake, Estwaithe Water. The lake was filled to the brim with rainbow trout, but that did not stop me from NOT catching any fish!

Sitting in a boat on a lake for a full day isn’t the worst thing life has on offer though.