My father is a collector. Not in the sense that he collects specific items of particular actual or sentimental value, he merely accumulates things. Things that have no particular use or function but occupy a rather large and unseemly amount of space!

My father however, used to run a logistics company. That meant near unlimited transport capacity. Once he scaled down operations to only one lorry he also freed up an abundance of space for storage, previously occupied by his vehicle fleet.

Please join me on a safari of my fathers garage: 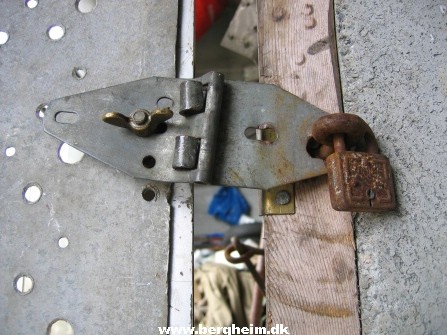 We start off with a look at the high security door that keeps unwanted visitors out of the garage. The door is secured with a rusty padlock for which my father has never had a key. In fact, the bolt to which the padlock is attached is screwed through the hole in the hinge and into the wooden beam with the lock already attached to it. In order to open the door, remove the wing-nut that secures the hinge to the door.

My father tends to get mad whenever someone visits the garage without putting back the wing-nut, claiming that someone might steal something. Yeah, right! 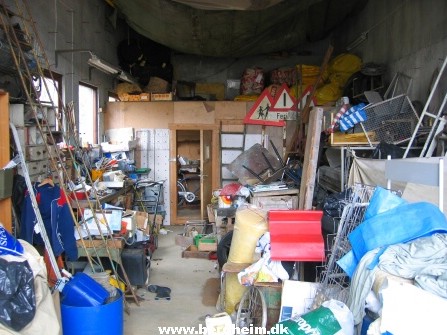 Well inside we start to get an overview and immediately see such diverse items as broken ladders (on the left), stolen road-signs (top, center), house-insulation (bottom, center). Other indistinguishable material also abounds. Please notice a nice detail: the coat-hanger with a jacket on it, hanging from the ladder, giving the impression of a well-organised garage-owner. 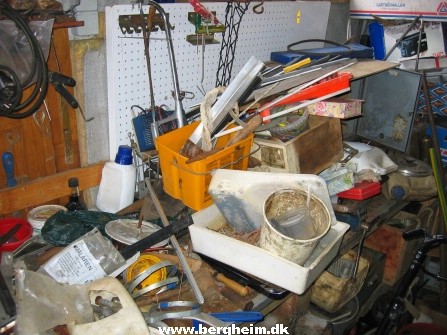 Though the garage overall is nothing but a mess, a lot of tiny, tiny sub-systems exist to organise screws (like the bucket in the box near the centre of the photo) or the bolts that are stored in a container, custom-made from a plastic bottle that has been cut open. I call it micro order. 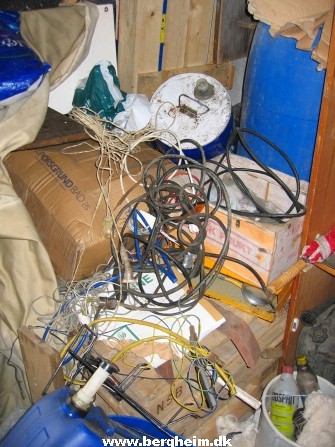 Though all things aren’t organised into containers, areas or regions of the garage are reserved for clusters of specific types of objects; here from the area where arbitrary cables and wires can be found in the unlikely event that they shall ever again be needed. 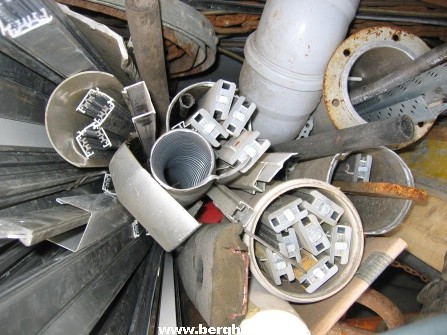 All space is potentially useful. Therefore my father has exploited the storage potential to the full, stuffing old drain-pipes and plastic plumbing pipes with scrap-metal and lead-pipes. 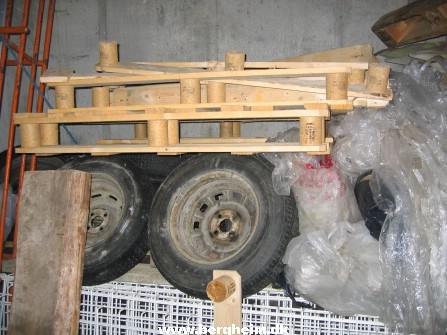 Old, worn-out tyres make out part of the foundation of complex shelve-constructions such as is shown in this photo where pallets (designated to store something else) are laid out on top of the tyres which in turn are standing in a semi-upright position on top of some grid iron. 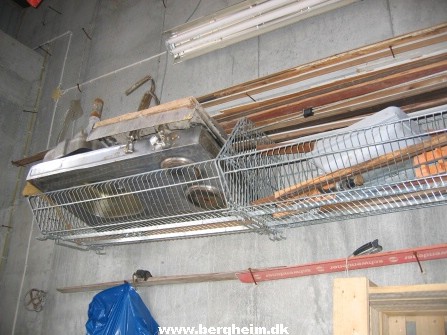 On a set of discarded store shelves that are mounted four meters up on the wall of the garage is the department for old sinks and wooden lists. A collection of old skis, where only one remain, the other one being broken or having vanished, can be spotted below the shelves. 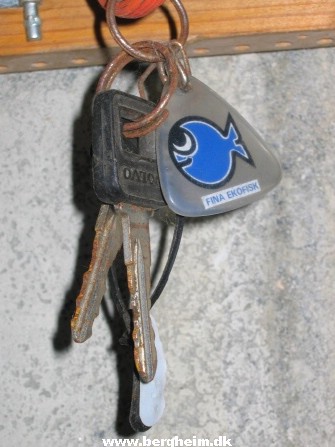 Although it may seem like a minor detail to externals, I personally find the set of car-keys for our old Volvo 240 from the early ’80s to be one of the novelties. The car passed into oblivion more than 20 years ago.