What: Sightseeing in Umbria and Marche, meeting in Ancona 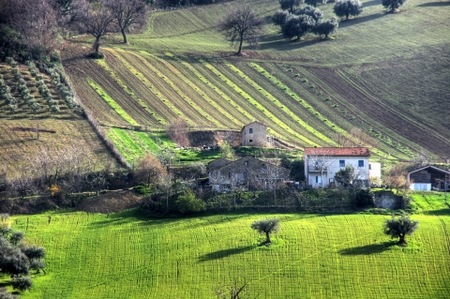 Farmlands in the countryside in the western part of Marche

As is my custom I decided to go a few days early and catch a little bit of the area when I anyway had to go to Italy for a buiness meeting.

I laid out a small itinerary starting and finishing in Ancona with stops in Gubbio and Spoleto in Umbria as well as Bolognola, Monte Sibillini, Macerata, Numana and Monte Conero in Marche.

Having landed in Ancona at midday, I didn’t venture so far the first evening. I drove westwards across the mountains into Umbria and headed north to Gubbio.

Gubbio is a nicy medieval city laid up against a steep hillside.The architecture consists for the greater part of stone houses. In a way only Italian cities can, Gubbio gives the impression of being a place which has operated in the same fashion for ages. 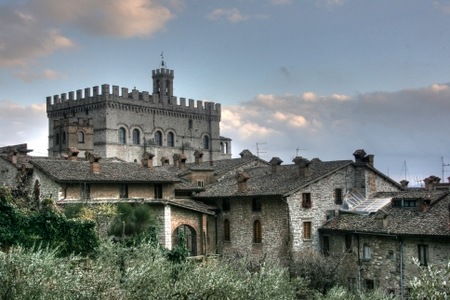 Hilltop “castle” near the Park in Gubbio

The next day I set out southwards to the city of Spoleto which I felt confident that I had read fortunate things about in my travel guide – without remembering exactly what. I spent the morning walking around in this city which in addition to an agreeable centre also has an impressive aquaduct crossing a deep valley, cutting the hilltop city of Spoleto off from the adjacent mountains. 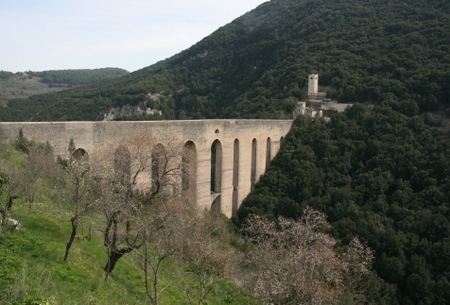 I didn’t have a clear plan of my itinerary onwards – but had found a nice zig-zag road crossing the Monte Sibillini range back towards the eastern lowlands while studying the area in Google Earth.

Wayfinding was secured by my (at times) trustworthy GPS. It did however occur to me that the accuracy and currency of the map data might have been better: At one stage my GPS took me through a village which a perfectly good highway would have led me around at a fraction of the time.

Italy is widely reknowned as the cradle of good food, and so I felt that I was in the rigth when I ordered a mixed grill at a road-side restaurant east of Uscita. This turned out to be completely wrong – or at the very minimum the exception which proves the rule. Had I ordered Haggis I might not have been quite as surprised at what I found on the plate, but as it was I felt more than a little cheated upon getting back in my car continuing my journey.

The start of my zig-zag-road was a winter sport resort by the name of Bolognola which turned out to be considerably less remarkable than anticipated – but which still offered some nice views on the way to the ascent.

On the eastern side of the Monte Sibillini range, the terrain is gradually transforming into a hillly landscape, getting flatter and flatter towards the Adriatic coast.

After consulting Lonely Planet during my miserable lunch experience I had decided that the village of Numana near Sirolo and Monte Conero would be a good place to stay on the next evening. I was however not in a rush and took my time sightseeing as I drove east through the hills.

A hilltop village by the name of San Ginesio gave a fantastic view back towards the Sibillini range and would, in better weather, have been a fantastic place to take photos. As it were, the view was better than the photos.

A significant university city, Macerata, is also located in Marche. I spent an hour or so walking around here also while dusk turned into evening. After my drive in the mountains the crowds of Macerata were quite overwhelming and I was soon saturated.

After having checked in at my hotel in Numana I headed out to look for a restaurant. I assessed one place after the other – which didn’t take too long since there were only four open eateries in Numana. The first one looked ok, but too basic, I thought. The second one looked too posh – and too full. The third one had an interesting view over the harbor (even though it was pitch black by now) – I decided to try here.

It seems I didn’t fit the bill of the regular diner in this restaurant because despite 90% of the tables being vacant I was informed that “sorry sir, we have no free tables”.

In despair, I returned to the first place in order to get some basic food, just in time to see them close.

This most definitively wasn’t a day in the name of culinary delights –Bitter and resentful I decided to head for the lower sea front. Here I found an establishment with an unnatural concentration of people with dark blue jackets with brass buttons. A yacht club of some kind where they, reluctantly, agreed to serve me a fish which has suffered some kind of intercourse with hot water. On top of this, I negotiated a bottle of wine.

Monte Conero is both a little mountain and a stretch of cliffs on the coast directly south of Ancona. The next morning I made my way along the coast and to the airport where I had agreed to pick up colleague Olga for a final sightseeing session prior to the meeting which was to commence the next day.

We spent the afternoon touring the coastal near Monte Conero before dropping back into Ancona in the early evening.

Upon surrendering the rental car at the airport we had to get a taxi back into the city. The taxi service at Ancona airport wasn’t really ready for this massive influx of passengers (2) outside of the time when there were flights scheduled to arrive. We therefore had to spend some time trying to motivate a sleepy and disoriented guy who bore all the hallmarks of a taxi driver (without any of the commonly accompanying navigation skills) to take us to Ancona.

A shameless fraud, the driver insisted on showing us one Ancona attraction after the other, most of which turned out to be either non-existent, non-attractive or both. For each defeat, he excused himself citing his sister-in-law or her friends as source of the erroneous information.

The low-light of the sightseeing tour was a trip to the tourist harbor at an additional cost of 15 € judging by the taxi-meter. This turned out to be a seasonally empty set of berths rented for private motor yachts and sail boats.

We on our part told him that we were married, but not to each other and that we would appreciate his discretion. Upon learning this he became silent as an oyster and suddenly remembered where our hotel was located. Difficult to get these Catholics. It is ok to con a man – but sins of an extra-martial nature are taboo.

Not so much to say about Ancona really. A messy little harbou
r city with a number of attractive squares. A decent selection of restaurants with italian fare, a good selection of local and national wines. What more do you want?

From here and onwards it was all meetings. 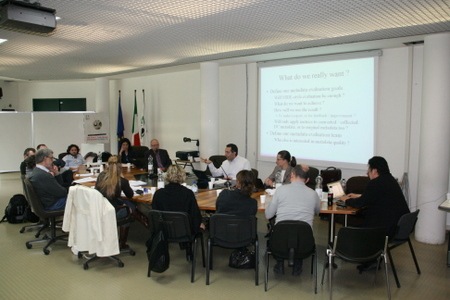 Sarantos giving an inspired lecture on metadata evaluation. From the meeting in the Evaluation Work Group in the EuropeanaLocal project

Upon departing from Ancona we faced a problem which I had thought endemic to Sogn og Fjordane: fog.

No planes could land – and so no planes could take off. We were sent southwards to the neighboring city of Pescara and flown from there to Munich for an unscheduled stop-over until I could return to Abu Dhabi the following day.

I didn’t feel as sorry for myself as I did for Sarantos though. He had achieved the masterpiece of buying a return ticket for a non-existent flight which didn’t start operating until two weeks after. In the wake of this he was forced to travel through Rome and an unknown number of hops until he was home – three days later.